At the opening of the me 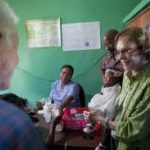 eting, Lelio Marmora, Latin America and Caribbean Team Leader at the Global Fund, said: “This is an opportunity to strengthen a key player in the Global Fund structure: CCMs. They are responsible for the strategic oversight of grants, guaranteeing local ownership. At the Global Fund we need strong systems, not just strong people”, he concluded.

Jamaica’s Minister of Health, Dr. Rudyard Spencer, expressed his gratitude for the work carried out by the Global Fund, its investment in the Caribbean, and for selecting Jamaica to host the event. He said: “This is a critical moment for the AIDS, tuberculosis and malaria responses due to the global economic crisis. Our countries have also been hit by this crisis, and we cannot afford to be ignored or pushed to the back of the line. We must move away from an eligibility criteria that restricts us from applying for funding”. In this respect, he added: “In our country, 25% of our population lives with less than US$2 dollars/day; after Sub-Saharan Africa, ours is the region most affected by AIDS”.

the Caribbean, more than 240,000 people live with HIV, and 20,000 new infections were reported in 2008 alone. It is estimated that 34,000 people have or have had tuberculosis and over 52,000 are affected by malaria. These figures may not mean much by themselves, they may even seem small, but they need to be understood within the Caribbean context. This region is mostly made up of small-island states, with small populations. Moreover, the Caribbean is home to the only country with a generalised epidemic in the region: Haiti.

Annelise Hirschmann, Fund Portfolio Manager at the Global Fund, presented some of the results of their work in this region: 111 out of 880 Global Fund grants are being implemented in Latin America and the Caribbean. 35 of them are being implemented in the Caribbean alone, totalling US$853 million dollars. The majority of resources, US$725 million dollars, are being spent on HIV/AIDS programmes, for instance, allowing the provision of ARV treatment to 39,000 people.

A colleague from Trinidad and Tobago once said that to be able to understand the Caribbean you need to live there, be there. Certainly, the Caribbean is unique in many of its characteristics; conservative countries with small populations, highly dependent on tourism for its main source of income. For instance, there is an island-state with a population of only 5,000; issues related to confidentiality and reducing stigma and discrimination are very challenging in a country of this size. The majority of countries are former European colonies which maintain a certain level of economic and cultural dependence. Legislation still reflects outdated, archaic laws from a Victorian era, including criminalisation of homosexuality and sex work.

These and many other factors have contributed to the high impact of the epidemic in this region and make developing an effective response that more challenging. And yet, winds of change are blowing… evident from the energy perceived in the participants at this meeting.

Translated into English by Cecilia Dávila.

Working with hard-to-reach population groups in the Caribbean
International HIV/AIDS Alliance LAC partners gather in London, for more than just a cup of tea
Comentario