On the first day of the International Conference, two important figures in the HIV/AIDS field gave a speech: Bill Clinton, former President of the [Bill Clinton] United States, and his fellow countryman, businessman and philanthropist, Bill Gates. With a different approach and style, they called upon everyone involved in the HIV/AIDS response to make every invested cent work.

On the first day of the International Conference, two important figures in the HIV/AIDS field gave a speech: Bill Clinton, former President of the 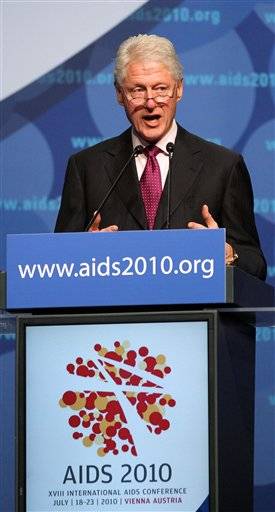 United States, and his fellow countryman, businessman and philanthropist, Bill Gates. With a different approach and style, they called upon everyone involved in the HIV/AIDS response to make every invested cent work.

“The world is awash with problems. It’s easy to advocate for governments to give us more money. But we must change the way we do things”, said Clinton in a critical tone. “If you want to win the case, they (donor governments) must think we’re doing our work faster, better and cheaper. Then we’ll have the moral authority to ask people to give us more money”, he concluded.

A few hours later, with a more moderate tone, the President of the Bill & Melinda Gates Foundation said: “We can’t keep spending AIDS resources the way we’ve been doing it until now. We, advocate for more funding, must assure we’re making every dollar and every bit of effort work.”

Practising a role similar to his wife’s –United States Secretary of State -, Bill Clinton argued: “You have two choices: demonstrate and call upon President Obama or try to get more votes in the Congress and get more money.” He also explained: “From my experience, the second choice is better and has more chance of success. No way would the White House veto an increase of AIDS funding.”

As a lover of science and evidence, Gates called upon a fast increase of easy-to-implement, cheap and effective HIV prevention strategies, like male circumcision, prevention of mother-to-child transmission and early treatment. “In Sub-Saharan Africa, over 41 million men could benefit from circumcision, but in the last year only 150,000 had access to it”, he said. To support his words, he showed a video telling the story of a 19 year-old South African young man who was “anxious” to be circumcised.

Bill Gates asked to focus prevention efforts on the most vulnerable populations, such as men who have sex with men, sex workers, transgenders and drug users. He also demanded more advances in basic science, diagnostics, mathematical models and any method to understand the virus better. This would include vaccines; new diagnostic methods and prevention products based on ARVs, like pills, injections and gels. He also referred to the provision of ARV treatment of people living with HIV as a prevention strategy.

Although there are similarities in their demand for more efficiency and effectiveness, in making money work and being accountable for it, one of the speakers seemed to be more diplomatic and worried about cost, and the other was more focused on innovation and scientific advances in order to make investment work. Perhaps one of them was carrying a “mission” and the other was carrying a “vision”.

Between the two speeches, a press conference was held in a rush, oddly responding to some of the concerns mentioned above. During it, Michel Sidibé, UNAIDS Executive Director, admitted to be frightened and explained: “In 2009 European governments reduced their contribution by 600 million Euros. We need this inclusive and nationally governed mechanism (The Global Fund) to be fully funded.”

Rolake Odetoyinbo, of Positive Action for Treatment Access in Nigeria, said to journalists: “We can’t take half measures. They are deciding who lives and who dies. We need 20 million for The Global Fund. Please tell the world we are here and we want to live.” Then she explained how, in 2002, before The Global Fund arrived in her country, she had to find 500 dollars each month to pay for her ARV treatment, equivalent to several minimum monthly wages.

When journalists asked about the concerns raised by Clinton earlier, Michel Kazatchkine, Executive Director of the Global Fund, responded: “The Global Fund is a mechanism based on performance and its investments are audited by a Local Agent and by the Office of the Inspector General established by the Board of the Global Fund. Each cent the Global Fund received is invested in programmes; we do not charge overheads. The interests generated by the money deposited in the bank account are the source to cover operational and administrative costs.”

“I want to tell you that we all know the Global Fund has investigated each case of corruption and responsible individuals have been taken to Court. I am not aware of any other funding mechanism which has done such a thing”, Odetoyinbo concluded.

In summary, it was a day of lively exchanges, with some constructive criticism (others less so), some revolutionary ideas, but still the same old uncertainty about the future availability of resources.