Last July, two gay men were brutally murdered during a rally against same-sex marriage organized by the Coalition of Religious and Moral Organizations of Haiti.

“Death” tends to be used as a result natural causes, but here it can be used as a headline, with the impact that this awful news merits, to refer to two brutal hate crime murders. 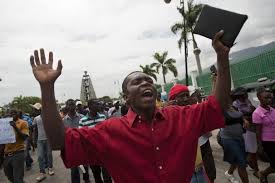 On Friday 19th, hundreds of people gathered in the city center of Port-au-Prince, the Haitian capital, to protest against same-sex marriage, at a rally led by the Coalition of Religious and Moral Organizations. This is a group of conservative, fundamentalist protestant churches and religious organizations who expressed their vehement opposition to the very idea of parliament wanting to promote a law that would deal with this matter.

The reality is that, unfortunately, the legislative body of Haiti is far from considering it on the agenda. But just in case, and with a threatening public message, they gathered, as they stated, to “reject and condemn homosexuality and its types”. It was a message that took only minutes to turn into acts of hatred that ended in two deaths.

Was this a spontaneous mobilization? According to our sources, this demonstration is the result of the reaction from these sectors to the Haitian government’s support of or non-abstention from recent resolutions of the Organization of American States (OAS) on human rights that include the adoption of the Inter-American Convention against all forms of Discrimination and Intolerance. (For the full article on the OAS see this link).

Local and international organizations and groups have repudiated these events and have called for a prompt and extensive investigation so as to avoid further impunity. 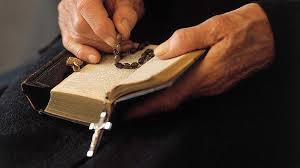 It is nothing new for some religious groups to promote demonstrations against the rights of the LGTBI community in Latin American countries and in addition do so with violently hostile messages. What is hard to conceive is that these messages of hatred translate immediately into action. The victims were beaten to death in a place close to the demonstration and their bodies left lying in the street for hours, in the presence of these “religious leaders”, without the remotest show of mercy.

There are perpetrators of these crimes, who we hope are identified and judged, but it is important also to put the spotlight on those who are accessories to these murders. There must be a political and social condemnation of religious organizations and institutions that, in the name of “faith and morality” promote hatred, which is expressed in its most extreme forms with physical violence, to the extent of taking a person’s life.

The near underground sexual diversity groups in Haiti have for years been reporting institutional violence, which comes in the form of police repression and constant public condemnation from representatives of some churches and the government. 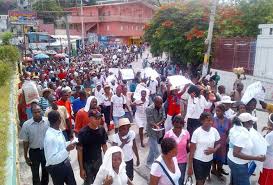 “The abominable events in Haiti are not only a breach of the right to identity and freedom of expression, but also a threat to the response to HIV in a country with one of the highest prevalence levels in Latin America and the Caribbean. How can we ask transgender and gay people and MSM to make use of health services in this climate of hatred and rejection? Those responsible should not go unpunished if we want a world that respects everyone’s human rights” said Anamaría Bejar, the Associate Director of the International HIV/AIDS Alliance.

Any act of violence is to be repudiated and is unjustifiable in any place, but we must not lose sight of the fact that Haiti is the poorest country in the region and the most affected by the AIDS epidemic. With two decades of a widespread epidemic, the country is living in near-chronic political instability and has been crushed by a series of natural disasters. Although HIV/AIDS is a disease that affects a very high proportion of the general population of Haiti, it affects most acutely sex workers, trans and gay people and other MSM. Such professions, gender identities, sexual orientations and sexual behaviors are highly risky in this sister country.

We hope to be able soon to bring news of some progress in investigations into these specific cases, as well as some significant change in those fundamental religious groups responsible, today, for some of the violence in Haiti.

Clarification: There has been some contradictory information about the murders. Haitian police have said that the people who were threatened were protected. Local organizations are supporting the investigations to determine whether these acts of violence, which have been confirmed, triggered or not the deaths of two gay people.