Two weeks ago, Key Correspondents, together with UNAIDS and PAHO, organized a meeting to discuss how to promote the vaccination of People with HIV (PLWHA) in the region. The alarming conclusion is that people with HIV are not being adequately prioritized

A month ago, UNAIDS published a clear, simple and unambiguous recommendation: “There is no reason not to vaccinate a Person with HIV” and the document also summarizes some evidence on the benefits of vaccinating PLWHA. But the reality in the region indicates otherwise. In preparation for the meeting, we conducted a micro-survey involving seventy activists, mostly PLWHA, which yielded disturbing results.

Some data on the regulations in the countries

As to whether in our countries there is a recommendation or guidelines from the Health Authority on Vaccination by COVID for PLWHA, only 35% of the participants answered yes, which leads us to infer that around 60% of the countries are not vaccinating PLWA. Or that there are restrictions on vaccinating PLWHA or considering them as part of the general population.

Among the countries that do vaccinate PLWHA, only 25% of the recommendations are aligned with the international recommendations of not making reference to CD4s or Viral Load as a criteria. The others, without establishing any criteria at all, only allow vaccination of those people who have more than 200 or 350 CD4 and in many cases require that their viral load be undetectable.

Only 16% of the countries that recommend the vaccine for PLWHA or prioritize it have designated people living with HIV as eligible based on their condition. The remainder, the majority, use ambiguous terms focused on “immunocompromised” or “chronic patients”. This ambiguity could leave the vaccination decision to the interpretation of health care providers. 20% of the people who provided information in the survey indicated that PLWHA are in the fourth priority group for vaccination in their country, along with other people with chronic health issues. 85% of the people who responded to the survey believe that people with HIV should be vaccinated.

What about other countries?

Currently, in all developed countries, people with HIV (PLWHA) are being vaccinated and regulatory agencies, such as the United States Center for Disease Control (CDC), place PLWHA along with other people with underlying conditions in the second priority group.

If we look at the table on vaccination coverage in Latin America that has been compiled based on the information that activist Richard Stern and his team summarized , (included below) vaccination coverage in the region is excessively low. In some cases, zero. This is due to the combination of two major factors; firstly, the companies that manufacture vaccines are not providing supplies and are not responding to their contractual commitments. And secondly, many countries do not even have a national vaccination strategy as well as not having the political commitment and the resources or a combination of all of these. 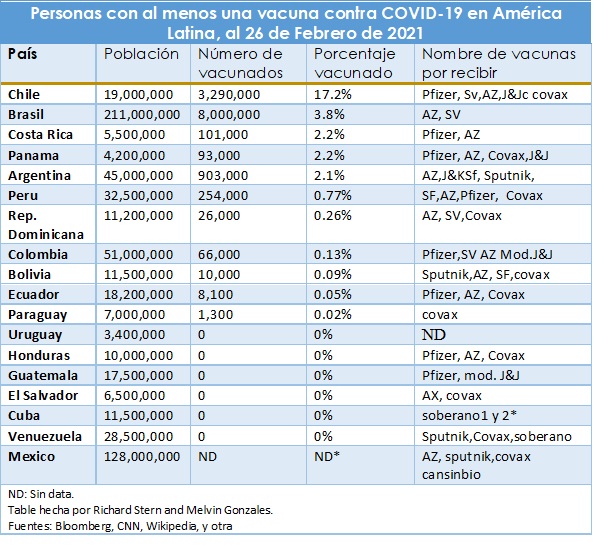 Today, in our region, the percentage of health professionals from the front lines who are most exposed to COVID, and who have received the vaccine is negligible and there is no clarity regarding the second dose. In other words, we could infer that at this rate, that those in the lower priority groups could wait more than a year to be vaccinated.

UNAIDS recognizes three variables that must be met to carry out an adequate vaccination strategy and these include fiscal capacity for purchasing , logistics for distribution , and physical capacity for administration. And in line with the People’s Vaccine Alliance, UNAIDS mentions some of the principles that this initiative postulates: 1) A vaccine that is sold at cost and is free of charge for the people; 2) Prevention of monopolies in the production of vaccines; and 3) Fair allocation of vaccines and Full participation of governments and civil society in decision-making.

The vaccine for the rich

A few days ago, the Secretary General of the United Nations put the spotlight on the fact that 75% of the vaccines for COVID were being applied in rich countries. During the past year, while the phase studies were carried out in rich and poor countries, and in the context of the COVAX initiative, it was guaranteed that through this initiative, that 1 out of every 3 vaccines would be donated to poor countries. An ethical principle which, for now has not been put into practice.

According to the People’s Vaccine Alliance: 9 out of 10 people in poor countries will not be able to get vaccinated during 2021, while the richest nations have bought enough doses to vaccinate their entire population almost 3 times over by the end of 2021. 14% of the world’s population has bought 53% of all the most promising vaccines so far, an immoral, Victorian, and colonial reality. If nothing drastically changes, rich and developed countries could achieve herd immunity and achieve a new normal in one year, March 2022. However, it is estimated that it will take three years for poor and developing countries to achieve it, not until January of 2024. This obscene inequity requires a clear repudiation and urgent political advocacy actions to reverse these almost genocidal trends.

It is known that, in Latin America, 27 countries will pay for their vaccines and 10 will receive them at no cost. The central issue is that there are not enough vaccines, and the stocks are used in the countries of the “north”.

We know today that hundreds of people with HIV have participated in all the clinical trials, whose more detailed information has been published, such as Pfizer, Oxford / Astrazeneca and Moderna, and the occurrence of adverse effects and some complications has not been recorded. There are some newer specific studies on the use of COVID – 19 vaccines for PLWHA, and their results have not yet been published. Many doctors and officials utilize this last argument to avoid vaccinating people with HIV. Not only is it important to understand that nearly 600 people participated in the above-mentioned studies, but in developed countries, thousands of PLWHA are being vaccinated daily. There is no record of documented adverse effects due to its HIV serology. There is no more time for excuses.

– There are no contraindications to vaccinating PLWHA. Regardless of the stage of infection, CD4 and Viral Load and immune response, there will always be a benefit to being vaccinated against COVID-19. There is ample evidence in the world on the safety and benefit of vaccination. Specific protocols or studies with PLWHA should not be used as an excuse to delay vaccination while “waiting for more evidence”.

– The Viral Load and CD4 study requirements in times of pandemic are an almost insurmountable barrier for PLWHA to access the vaccine. And with such strong international recommendations, the decision should not be left to medical judgment.

– People with HIV, particularly predisposed to the comorbidities of living with the virus and, as well as due to receiving long term treatment, and therefore are at risk of greater mortality from HIV infection, which is why they should be prioritized.

– It is essential that in the national COVID vaccination recommendations and strategies, our population appears by name, “People with HIV”, avoiding placing them in nonspecific categories such as “immunocompromised people,” which should never be a valid criterion. Vaccination strategies must ensure the confidentiality of PLWHA.

– The UN Agencies, International Health Organizations and the Ministries of Health of our countries must urgently review their policies and strategies for vaccination for COVID to align them with international recommendations, evidence and results of best practice, in order to prioritize PLWHA as a group that needs to be vaccinated.

– NGOs, networks and civil society movements must join forces with groups of PLWHA to advocate within and outside the country for access to the vaccine. Also, they must carry out constant community surveillance of the status of the vaccination of PLWHA, as well as the known cases of deaths of PLWHA due to complications of COVID-19 infection directly or indirectly attributable to HIV.