After a year of negotiations the Peruvian Ministry of Health saw the price reduction of atazanavir by 35 percent as an achievement. For civil society organisations however, committed to continuing efforts to achieve the issuing of a compulsory license, it is the abdication of health from trade.

Since late 2013, several civil society organizations, activists fighting for access to medicine and people with HIV have launched direct action to push the country to grant a compulsory license for atazanavir. With the drug, and the subsequent entry of generic alternatives into the market, drug prices could have been reduced by up to 75%.

Last Friday, abdicating its role as guarantor of the right to health, the Ministry of Health abandoned its pursuit of the compulsory license and agreed a price for the purchase of medicine concerned with the laboratory Bristol-Myers Squibb.
The Ministry of Health (MOH) has described in a press release the price obtained in the negotiations with the pharmaceutical industry, which is equal to 35% discount on the price paid last year, as an “historic breakthrough in the reduction of the price of medicines”
The view from civil society
While it is true that the reduction achieved over a year of negotiations will allow a saving of around 5.1 million soles ($ 1.7 million), civil society organisations and spokespersons have noted that the discount is not significant when compared with the price that could be achieved with a compulsory license.
“With this purchase the MoH has given up and the health minister has departed from his principles as well as from his defence of the compulsory license as a sovereign mechanism to protect the right to health,” Javier Llamoza, coordinator of Action International Health (AIS), told Key Correspondents.
According to Llamoza, Humax, a Colombian producer who markets a generic version of the drug, had offered the tablet to Peru for the price of $2.32; well below the $6.77 that they will pay for each one of the 499,000 pills that they will buy to cover the therapy of more than 1,800 people with HIV until early next year. 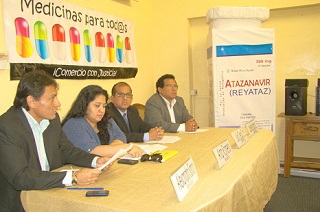 Llamoza also noted that while there is concrete evidence of Humax’s offer, there are also other providers; India would have offered the product for less than two dollars. The competitive market would have meant a saving of 75 percent, that is to say, Peru could have saved $2.2 million more. In a country where there are still many diseases that are not covered by the state and thousands of people are impoverished by health expenditures, or simply die, Peru cannot afford to give away more than two million dollars.
The coordinator of AIS is questioning what the way forward will be and whether the health minister Anibal Velasque  yielded to the trade agenda and turned away from his own principles that had led him to defend the compulsory license as a sovereign right.

State against State: helpless health
In recent days the confrontation between the Ministry of Health and other government agencies such as the Ministry of Economy and Finance (MEF), the Ministry of Trade and Tourism (MINCETUR), the Ministry of Justice (MoJ) and the National Institute for the Defense of Competition and Intellectual Property (INDECOPI) was made apparent; while the latter defended the trade and protection of foreign investment, the first was alone in defending the right to health.
As a result of this confrontation and a clear prioritisation of other issues over the health of Peruvians, Peru will have to invest $2 million more for drugs.
The road ahead
The civil society organisations involved will continue to work for the best investment of public resources. As noted by Javier Llamoza, the purchase will supply the country for a reasonably short time, keeping the compulsory license window open.
“It is not clear what will happen with the supreme decree that implemented the compulsory license, the purchases are for eight months, so we have to keep on insisting” Llamoza said.
The compulsory license is a legal mechanism that helps governments to create competition and reduce the cost of a drug, enabling governments to invest the resources of all its citizens more prudently.