The 2010 Red Ribbon Awards were announced at a celebratory dinner on Wednesday night. The Red Ribbon honors and celebrates NGOs, CBOs and groups from around the world for their outstanding contribution to the HIV/AIDS response. This year, three Latin American organisations were amongst the Award winners: AMMAR (Argentina), COCOSI (El Salvador) and Colectivo Sergay (Mexico).

An independent committee reviewed 720 nominations from which only 25 organisations were selected for the award. Selection criteria are based on the organisation’s  e 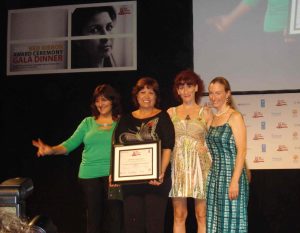 fforts to show: Impact, by overcoming barriers and challenges suffered by their communities in the access to prevention, care and treatment; Community Empowerment, by contributing to the empowerment of those groups most vulnerable to HIV; Engagement of people living with HIV; Sustainability and Coverage, by showing the ability to increase coverage at the national level; Gender Equity, by promoting the equal participation of men and women; Innovation, by unique and creative approches to reduce the spread of the epidemic; and last, Partnership, by the ability to build strategic alliances with other local actors.

This organisation, located in the far-off area of Santa Marta in El Salvador, was established in 1999 with the mission to support poorest communities through sexual and reproductive health programmes, including HIV prevention. COCOSI offers information and education on reproductive rights, HIV, STIs, gender and sexuality, domestic and gender violence, and youth issues. In particular, they have offered psychological and social support and resources to support women to care for themselves in an area severely hit by civil war. To learn more about COCOSI, please visit http://www.cocosi.org/

This organisation was established in 1994 by female sex workers who were victims of police corruption and violence. Some time later it became one of the few existing trade unions for sex workers. They are part of one of the biggest trade unions in Argentina, with 15 branches and 15.000 members covering most of the country’s territory. They work on human rights, labour rights, and HIV. They are the host organisation of the Latin American and the Caribbean Sex Worker’s Network (RedTraSex). To learn more about AMMAR, please visit http://www.ammar.org.ar/

This NGO has the mission to address homophobia and discrimination, promoting the access of sexual minority and vulnerable groups to equal rights and opportunities. They have promoted formal complaints due to discrimination and violence in Aguas Calientes, one of Mexico’s most conservative states. Since 2009, they contribute to the reduction of violence, stigma and discrimination through drama performances targeted at a broad audience. To learn more about Colectivo Sergay, please visit http://sergayags.blogspot.com/2009/05/colectivo-sergay-de-aguascalientes-ac.html

A party was held yesterday for these and the other 23 awarded organisations. It was an opportunity to celebrate and honour their contribution to improve their communities’ quality of life and reduce the impact of AIDS.