On Thursday morning, a Malaysia Airlines flight on route from Amsterdam to Kuala Lumpur crashed in Ukraine as a result of a terrorist attack. Some HIV/AIDS activists and professionals were on board, heading to the International AIDS Conference in Melbourne.

On this side of the world we woke up yesterday to the terrible news that a flight bound for Kuala Lumpur was shot down by a land-to-air missile, allegedly fired by a pro-Russian separatist militia in the Donetsk area of Ukraine. The Ukrainian president Petro Poroshenko immediately called the incident a “terrorist act”, while his Russian counterpart, Vladimir Putin, attributed responsibility to Kiev for having renewed hostilities in the east. 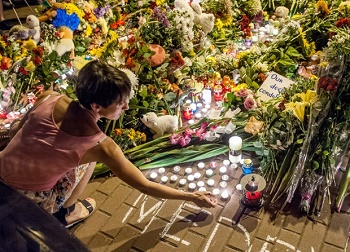 Yesterday we watched, with a sinking feeling, as the details of the horror emerged as we thought that the plane could have been carrying many delegates on their way to the AIDS conference. This information was quickly confirmed, and it is believed that some passenger belonging to our global movement against AIDS were on their way to Australia.

One of the first names to be made public was that of the former president of the International AIDS Society and Dutch scientist Joep Lange. Joep led the IAS between 2002 and 2004. What better tribute to Joep than to share the words of my friend and colleague Shaun Mellors, the Associate Director for Africa at the International AIDS/HIV Alliance: “This is a great collective loss for science, research, medicine and public health. These people dedicated their lives to others and we are committed to continuing their important work”.

“I first met Joep in 1995 and found in him a mentor and an ally. He was a powerful advocate for treatment access, fought hard to ensure that people living with HIV were involved and included, was not afraid to share his views even if they were against the establishment, and he had a wicked and enjoyable sense of humour”, said Shaun.

Other colleagues close to the Alliance family who died in the attack are:

Martine de Schutter, Program Manager at Bridging the Gaps AIDS Fonds, a colleague strongly committed to work with key populations. On her LinkedIn profile she wrote “Throughout my professional life I hope to contribute to making the world a better place to live, work and love”. Martine was an anthropologist and a specialist in gender issues, sexual and reproductive health, and HIV.

Pim de Kuijer, a great community lobbyist with Stop AIDS Now. Pim seemed to have been born to do this public affairs and governmental relations job, and demonstrated know-how, focus and precision in everything he did. On his Facebook profile he wrote “Lobbying isn’t just my hobby, it is also my everyday job”.

I am mentioning only three names here because these are people I know, who I have worked with, and at the time of writing are among the few names of confirmed casualties. According to information from the conference organizers and the Australian government, it is estimated that over 100 conference delegates will have lost their lives. When we know their names, their stories and their legacies, we will share them, because today the world, our movement, has lost over 100 leaders and fighters, all equally irreplaceable for the cause, whether professors emeritus or grass-roots educators.

Terror sometimes plays with perverse coincidences. Today, like every 18 July, I woke up feeling in my body and soul one more anniversary of the AMIA terrorist attack in Buenos Aires, which took 85 lives and left dozens more mutilated or disabled.  Anyone like me, who lived close to the place of the attack, could never forget the explosion at 9.53 in the morning. Today it is 20 years since that act of terror. The perpetrators have yet to be brought to justice, and the Active Memory organization defines it implacably: “We are not lacking memory, we are lacking justice”.

Today we have shared three names because we know them. In our hearts are over 100 colleagues and comrades in the fight against AIDS who lost their lives in this act of terror. From our home, in this part of the world, we join the expressions of condolences for the families and friends of the victims. And we strongly wish that in this case, neither memory nor justice will be found lacking.

Broken confidentiality
To provoke is to prevent
Comentario