On October 20th, PAHO and ECLAC representatives expressed their concern about the potential impact of the TPP trade agreement signed at the start of the month; in doing so they joined with civil society concerns that the agreement will lead to greater barriers to access to medicines.

After the signing of the Trans-Pacific Partnership (TPP) on 5th October, civil society organizations of Peru and other countries involved voiced their concern over issues included in the chapter on intellectual property that could have a major impact on access to life-saving medicines.
The countries participating in the agreement are Peru, Chile, Mexico, the USA and Canada on this side of the Pacific Ocean, and Australia, New Zealand, Brunei, Malaysia, Singapore, Japan and Vietnam on the other side. 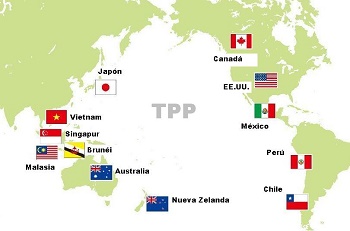 After negotiations concluded, extracts from the intellectual property chapter were leaked via Wikileaks which revealed the new protection that has apparently been granted to medicines. Increase in the terms of patents for “unwarranted delays” in the granting of marketing approval, protection of test data for biologics and protection of test data of new clinical information or new combinations (new uses) are some of the points agreed on that will extend monopolies in the field of medicines.
The measures mentioned could impact directly on the availability of medicines currently on the market and of those generic versions that are waiting for the term of the patent to expire in order to enter Peru. With the extensions to the protection of test data (very similar to patents), the monopoly period could be prolonged indefinitely, preventing or delaying access to generics.
There are examples that can illustrate these extensions of protection and monopoly. Zidovudine, a medication created to treat cancer, was under an initial patent. Years later, when it was discovered that it could be used to treat HIV, this medication’s patent was extended for this new use (based on new clinical information). The extension of the term of the patent or of the protection of test data (information that guarantees that the drug is safe and effective and which is submitted to the health authority of each country) allows pharmaceutical laboratories to go on charging high prices.

In Peru there is evidence of the enormous investment that the country must make to buy atazanavir because it is under patent protection. Last year, the Health Ministry assigned around 7 million dollars more to buy the Reyataz brand of the medication than if would have spent had it been able to buy a generic version.
Conscious of the impact of patents on the price of medicines, the Peruvian Health Ministry has remained firm in not extending terms of patents, of the protection of test data for chemically synthesised drugs or the granting of protection of test data for biologics. However, contrary to the Health Ministry’s position, the Ministry of Foreign Trade and Tourism accepted these points in the last round of talks.
In recent days, the Pan-American Health Organization, through its representative in Peru, Raúl González Montero, voiced his concern about the agreements reached in the TPP. “Medicines, diagnostic tests, vaccines and biosimilars cannot be lumped together with other consumer products. It is our role as a leading health agency to protect the rights of users in access to medicines. With high-cost medicines we may have problems of access to medicines in the future. There are lots of cases that have been closely studied. This is the case of the antiretroviral drugs. Patent protection over long periods of time means that generics cannot enter countries on an equal footing,” González told a local media outlet.

The Economic Commission for Latin America and the Caribbean (ECLAC) also expressed some caution towards the recently-approved treaty: “Public opinion has to understand the chapters (of the agreement), what was negotiated and what the impact will be on regions like ours,” said Alicia Bárcena, executive secretary of the Commission, to various media regarding the presentation in Mexico of the report “Overview of the International Insertion of Latin America and the Caribbean” a few days ago.
In July this year, UNAIDS had called on countries to honour the commitments taken on in the 2011 Political Declaration on HIV/AIDS regarding universal access. “During the negotiation of new trade agreements, it is vital that we respect the flexible mechanisms established in the Doha Declaration and the TRIPS Agreement to protect public health and offer access to medicines for all” said Michel Sidibé in a statement to the press.
In Peru, the government, big business and some media were quick to celebrate the conclusion of talks and spread news of the great gains for the country when the new treaty comes into force. It is to be hoped that the hangover from so much celebration will not have the impact that is anticipated on the lives of millions of Peruvians.
Civil society organizations involved in the fight for access to medicines have initiated a campaign to inform congressmen and women and decision makers of the impact of these measures in the country and prevent the ratification of the treaty by the Peruvian Congress.
On  November 5th, according to the announcement, the full text of the agreement was published by Mincetur. But the full analysis of the impact that TPP will have on everyone’s health, including the chapters of Investments and Transparency which tend to conceal measures that hinder countries’ actions aimed at protecting the health of their inhabitants,  is still pending.