The new report "The night is another country: Violence and impunity against transgender women human rights defenders in Latin America" lauched today by REDLACTRANS and the International HIV/AIDS Alliance analyses the testimonies of transgender women human rights defenders and HIV activists in different Latin American countries, with a particular focus on Guatemala and Honduras. 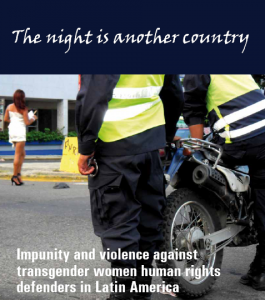 As we observe Human Rights Day today, the Latin American and Caribbean network of transgender people (REDLACTRANS) and the International HIV/AIDS Alliance are taking the opportunity to highlight the human rights violations of transgender women in Latin America.

In the words of Anand Grover, UN Special Rapporteur on the Right to Health in the report foreword: “I hope that this report will be widely read and more people will be inspired to work on these issues so that the dignity of transgender people is restored”.

The transgender population is most affected by the HIV epidemic in Latin America, with a prevalence of 35%. To end the epidemic in the region, it is essential to ensure respect for the human rights of transgender women and their access to health services that respect their gender identity.

“The report highlights how transphobia has permeated different structures of society, family and institutions, robbing transgenders of their human dignity. It is a valiant effort to document the appalling number of murders and extra-judicial killings of transgender women human rights defenders in Latin America, whose deaths remain uninvestigated by government agencies. The systemic failure of the rule of law and the growing culture of impunity that results from it indirectly legitimize horrific acts of abuse and violence against transgender women. Failure to protect women against violence or to prosecute perpetrators is also a violation of the State’s obligation to protect the right to health of women”, states Anand Grover in the report foreword.

The report in English can be found in this link or here, in Spanish.

Systematic human rights violations are committed against transgender human rights defenders and other transgender women by State actors. These violations include extrajudicial executions, torture, cruel, inhuman and degrading treatment and arbitrary detentions that extend beyond the heading of hate crime. Around 80% of the transgender activists interviewed reported violence or threats to their physical integrity allegedly emanating from State actors.

Such impunity manifests itself in a culture of silence that impedes the filing of complaints, a failure to adopt a differentiated approach when dealing with such cases, ineffectiveness in the justice system, the existence of discriminatory legislation and the absence of legislation on gender identity. 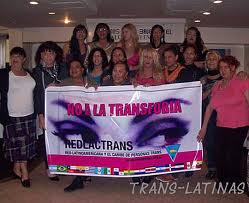 The extreme risk of human rights violations against transgender human rights defenders is exponentially increased in the context of sex work. This is due to police making use of the sex work context to take reprisals against defenders because of their activism. 95% of the transgender human rights defenders interviewed combine their activism with sex work. In around 90% of the cases covered in this report, the violence reported is related to sex work. The case of Colectivo Unidad Color Rosa de Honduras speaks volumes: of the seven members who set up the group in 2001, six have been murdered.

The report makes a number of recommendations aimed at state authorities in Latin America, the international community and civil society. Please share The Night Is Another Country more widely with your own contacts and networks. Early next year, REDLACTRANS and the Alliance will be organising a series of international dialogue meetings to share the findings of the report and engage with key policy makers.

Other related articles (in Spanish) in this link.