Special Report–The 43rd General Assembly of the Organization of American States (OAS) was held in Antigua, Guatemala, between 4th and 6th June. Member states adopted a strongly worded declaration to promote and protect the rights of vulnerable people who are affected by or live with HIV/AIDS and also adopted two Interamerican conventions against discrimination.

In his opening speech to the General Assembly, OAS Secretary General José Miguel Insulza, set the tone, recognising that “Habitually in our countries the rights of minorities are overlooked. However, this is a space where we can speak freely and engage in open dialogue about these hemispherically important political topics”. That it has been possible to reach this point is due in particular to the work of the OAS Coalition of LGBTTI Activists, a working group set up to seek the inclusion of sexual orientation and gender identity in the Inter-American Convention against Racism, Racial Discrimination, and Related Forms of Intolerance, which has been taking part in all OAS meetings in recent years.

The discussion and the resolution approved in the plenary had their origin in a Special Report produced by the OAS General Secretariat on the Problem of Drugs, a document that presents a picture of the crude reality of drug-use faced by the countries in the Americas. It analyses the anti-drugs policies implemented up to now and the scenarios that are likely to occur if the problem is not faced in a coordinated manner.  Speaking of this report, Insulza said: “We have tried not to silence or hide anything“, in order to “show the problem just as it is and how it manifests itself in different ways in our various countries and sub-regions; to show the volume of money that changes hands and who benefits from it; to show how it erodes our social organization and how it undermines the health of our people, the quality of our governments and even our democracy.”

The principal points agreed in the declaration are:

–  [To] continue to advance in a coordinated manner in the search for effective solutions to the world drug problem with a comprehensive integrated, strengthened, balanced and multidisciplinary approach with full respect for human rights and fundamental freedoms that fully incorporates public health, education, and social inclusion, together with preventive actions to address transnational organized crime, and the strengthening of democratic institutions, as well as the promotion of local and national development

– [To] encourage the consideration of new approaches to the world drug problem in the Americas based on scientific knowledge and evidence.

– [To fully implement] the three international drug control conventions (including the Single Convention on Narcotic Drugs of 1961 as amended by the 1972 Protocol, the Convention on Psychotropic Substances of 1971, and the United Nations Convention against Illicit Traffic in Narcotic Drugs and Psychotropic Substances of 1988), which constitute the framework of the international drug control system 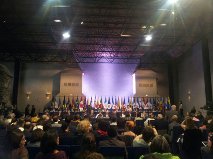 – [To] recognize that drug abuse is also a public health problem and, therefore, it is necessary to strengthen public health systems, particularly in the areas of prevention, treatment, and rehabilitation, and, at the same time, develop evidence-based national monitoring mechanisms…

– [To] make greater efforts to effectively reduce demand for drugs

– [To] implement and strengthen more-effective measures to prevent the illicit manufacturing of and trafficking in firearms, ammunition, explosives and related materials.

– To encourage member states, in accordance with their domestic law, to continue strengthening measures and policies, including a gender perspective, as appropriate, to reduce overcrowding in prisons, while promoting  greater access to justice for all, and establishing penalties that are reasonable and proportionate to the severity of the crime, and supporting alternatives to incarceration

We have been informed by the OAS Coalition of LGBTTI Activists that, as a result of a long process of discussion and negotiation, the OAS approved two conventions: the Inter-American Convention against Racism, Racial Discrimination, and Related forms of Intolerance which, for the first time in the region, includes that categories of sexual orientation and gender identity and expression in an international human rights instrument. Furthermore, the OAS General Assembly approved the sixth Resolution AG/RES. 2807 (XLIII-O/13) “Human Rights, Sexual Orientation, and Gender Identity and Expression”, which constitutes an advance in its innovatory call on member states to ensure appropriate protection to intersex people and to implement policies and procedures, as appropriate, to ensure medical practices that are consistent with applicable human rights standards.

In particular, the text of the  Inter-American Convention against Racism, Racial Discrimination, and Related forms of Intolerance includes among the duties of states to punish all acts and manifestations of discrimination and intolerance, including the publication, circulation or dissemination of any materials that defend and incite hatred and intolerance, as well as acts that constitute genocide or crimes against humanity including criminal acts against the property of victims, any repressive action and restriction on the exercise of rights such as restriction of access to public and private places with access to the public and access to education and any other economic, social and cultural right. 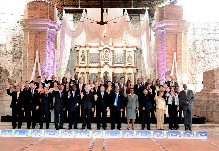 In order to ensure monitoring of the commitments assumed by the signatory states of both conventions, the documents propose the establishment of an Inter-American Committee made up of independent experts appointed by each State party.

Prior to the Assembly, a dialogue was sustained between civil society representatives and the heads of member country delegations. LGBTTTI people were represented by Johana Ramirez, an activist from the Guatemalan Organization Trans Reinas de la Noche (OTRANS) (see document).

3.- The Promotion and Protection of Human Rights of People Vulnerable to, Living with, or Affected by HIV/AIDS

Of this resolution, UNAIDS Executive Director Michel Sidibé said: “This Resolution comes at an opportune time, when global discussions on development and health are shifting, but also demonstrates that new opportunities are emerging to maintain the momentum to reach UNAIDS vision of zero discrimination, zero new HIV infections, and zero AIDS-related deaths”. Sidibé met with General Secretary General Insulza in Washington DC before the OAS General Assembly, when he indicated that “The OAS has been a leader in driving forth discussions around affordable medicines, and is breaking new ground in terms of addressing stigma and discrimination, and recognizing the intersection between gender-based violence and HIV.”

The principal points agreed in the resolution are:

– To reaffirm its commitment to the promotion and protection of all the human rights of people vulnerable to, living with or affected by HIV/AIDS, in accordance with the provisions of the “Political Declaration on HIV and AIDS:  Intensifying Our Efforts to Eliminate HIV and AIDS

– To continue supporting the efforts of the IACHR and the CIM to analyse the legal and regulatory framework governing HIV/AIDS, in the context of the international and inter-American commitments acquired by the member states to promote and protect human rights and fundamental freedoms, with particular attention to people vulnerable to, living with or affected by HIV/AIDS.

– To urge the General Secretariat to strengthen its cooperation with the Pan American Health Organization and the Joint United Nations Programme on HIV and AIDS (UNAIDS), in the framework of the “Political Declaration on HIV and AIDS:  Intensifying Our Efforts to Eliminate HIV and AIDS” (A/RES/65/277, 2011) by means of a cooperation agreement, and to develop a plan of action that includes, among others, the following objectives: 1) develop public policies regarding access to antiretroviral drugs and adequate production of medicines; 2) incorporate a gender perspective, focused on the protection and promotion of the human rights of women and girls; 3) review, as appropriate, laws and policies that adversely affect the successful, effective, and equitable delivery of HIV prevention, treatment, care, and support programs to people living with and affected by HIV/AIDS, 4) support the elimination of stigma and discrimination against people vulnerable to HIV/AIDS and 5) prepare a joint report on the social and human rights dimensions of HIV/AIDS in the Americas.

– To work with the Pan American Health Organization in the framework of its Directing Council to declare 2015 the “Inter-American Year to Promote the Human Rights of People Vulnerable to, Living with or Affected by HIV/AIDS”.

Bearing in mind the particularly challenging context in the English-speaking Caribbean and the recent advances of fundamentalist religious groups in some countries in the region, such as Brazil, we should highlight the brave nature of the declaration on the situation of vulnerable populations. The language used, though doubtless dense and dull, is of great importance for regional and national level advocacy.

Will the OAS work with some of its member states to review and modify legal frameworks that criminalize vulnerable population groups? Yes. This is the logic of the text of the resolution, in which the Secretary General is urged to develop a cooperation agreement and a joint plan alongside the PAHO and UNAIDS. Within this framework the three organizations will be able to advance on vitally important topics as well as legal frameworks with the power to apply sanctions in the areas of medical patents, gender, stigma, discrimination and other social dimensions of the epidemic.

Furthermore, every advance or failure to make progress on the decisions made last week in Antigua, Guatemala, will be up for review in the next OAS General Assembly. It is encouraging to count with a clear road map for action and cooperation and the possibility of evaluating progress to ensure that member states and organisations are accountable for their actions. Jointly with experts in the field we are going to analyse the resolutions and conventions that have been approved.

The first time that the OAS delegates heard from delegates and leaders from the trans community was when RedLacTrans participated in the General Assembly in Medellín, Colombia, in 2008. From that point on this network has been ever-present, along with other regional  LGBTI organisations. Their presence, and the systematic advocacy activities associated with it, is bearing fruit. All of us are duty-bound to take the fullest possible advantage of these resolutions.

On the same week as the OAS Assembly, in Guatemala City, OTRANS, the network’s partner in Guatemala, with the support of the International HIV/AIDS Alliance, presented its regional report La noche es otro país (“The Night is Another Country”) on violence against the trans community.

We are grateful to UNAIDS, the OAS Coalition of LGBTTI Activists and RedLacTrans for their collaboration.

All the documents produced by the 43rd OAS General Assembly are available through this link.