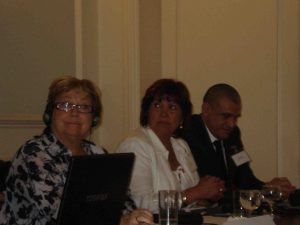 International non-government organisations based in the UK, Members of Parliament, ambassadors and other civil society organisations attended the seminar “Building inclusive communities: Sexuality, rights and progress towards MDG 6 on AIDS in Latin America and the Caribbean”. The seminar was organised by the Alliance and moderated by Baroness Anne Gibson of Market Rasen, member of the Inter-Parliamentary Group on Latin America and the Caribbean.

The Alliance organised this event with the aim of raising the profile of LAC in the United Kingdom, a country that makes a significant contribution to the global HIV/AIDS response. Issues discussed included working with most-at-risk populations, especially on that which concerns organisational strengthening and human rights. A special session on Haiti and the post-earthquake crisis was also included, as well as a debate on the Global Fund’s role in the LAC region.

Two networks, REDTRASEX (LAC Network of Female Sex Workers) and REDLACTRANS (LAC Network of Transgender People), and the Salvadorian Association Atlacatl, exchanged their experiences of working with key populations over the past few years.

Elena Reynaga, Regional Coordinator of REDTRASEX, said: “Our network has grown thanks to the continued support of the International HIV/AIDS Alliance, and this was made possible thanks to DFID (United Kingdom’s Department for International Development) resources. Not only is it important to obtain resources, but to send out a clear message to the region and to the world: that we can be trusted”, she concluded. 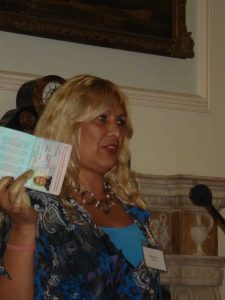 After sharing her regional and national work and experience, Marcela Romero, Regional Coordinator of REDLACTRANS, reflected on the importance of their work on human rights, especially in relation to violence. She referred to the institutional violence suffered by transgender people at health centres: “Our transgender friends get to hospitals with only a few days or even hours to live due to complications related to AIDS”. “Health workers treat us like weirdos and call us by our male name”, she explained.

Then Marcela showed the audience her new passport with her gender identity, and added: “Not until we are called by our real names, not until the photo, name and sex in our passports reflects our gender identity, can we stop feeling marginalised”. She went ont to explain: “Transgender people have been rendered invisible under the term ‘men who have sex with men’, and this invisibility has contributed to an HIV prevalence rate among transgenders as high as 35% in the LAC region. This is not the moment for funding cuts”, she concluded.

Basil Williams, Director of the Caribbean HIV/AIDS Alliance, and Marie-Mercy Zevallos, Director of POZ in Haiti, also gave presentations. The five national organisations present at the meeting coincided on some relevant issues: the need to increase human rights work; to continue focusing efforts on reducing stigma and discrimination; to make further advances in reforming criminalising legislation; and to increase direct access to funds by grassroot groups of key populations.

The last seminar session focused on The Global Fund to fight AIDS, Tuberculosis and Malaria. Lucca Occhini, Portfolio Manager based in Geneva, presented on the amount of resources that have been invested in LAC. Then he called upon participants to continue working to increase civil society’s participation in Country Coordinating Mechanisms (CCMs). ‘Their involvement is key’, he explained, ‘in guaranteeing that more and better interventions on human rights, sexual orientation and gender are included in proposals submitted to the Fund as soon as possible.

One issue that raised particular interest was the Global Fund’s financial crisis, the discussion on eligibility and prioritisation, and how to ensure increased efficiency in funded programmes. Clear messages were sent out to members of the British parliament and government officials about the need to meet the United Kingdom’s commitments to the Global Fund, as well as its commitments to other NGOs who support recipients and sub-recipients in LAC.

Silke Seco-Grutz, DFID’s Main Advisor on AIDS, confirmed that the UK government remains committed to the global AIDS response, and that it will continue to support the Global Fund and NGOs. Seco-Grutz also highlighted the outstanding progress made by the national AIDS organisations and networks present, and concluded by saying that their progress must be protected by securing funding for the future.

Those of us able to participate in this event feel that it was a success. We had the opportunity to showcase our progress and achievements, and talk about important trends in the region. But most important of all, we were able to highlight the importance of continued British government financial support to the Global Fund.

Global Fund meeting of CCMs/RCMs in the Caribbean
Interview with Pedro Cahn: “There can be no higher interest than the interest of human life, in any field”.