Once again a world celebration against homophobia and transphobia will take place on 17th May. We will rightly focus our analysis and show our disapproval of the recent events that have taken place in some countries in Africa and in Eastern Europe.

Here in Latin America, 2013/2014 has been a good year.  The recent progress in political commitments has been consolidated. A clear example of this was the brave statement made by the Organization of American States (OAS) last year.

However, few of the countries that appeared in the photograph taken at that OAS Summit have followed up the commitments with concrete legislative changes back home.

Equal marriage and gender equality laws are being developed in some countries in the region; however, these are the result of grassroots advocacy work by groups and organisations that have been prioritizing these issues over many years. These positive and progressive laws are important.  Each one can trigger and catalyze the social and cultural changes that reduce discrimination and violence. 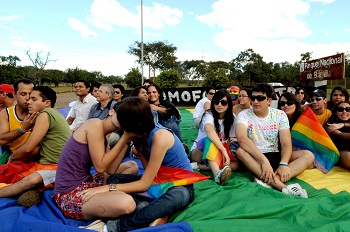 To date, Argentina, Uruguay and Mexico (only in the Federal District) have gender equality laws and further bills are to be presented by the chancellors of Bolivia, Guatemala and El Salvador in the next OAS Summit which will take place in early June 2014 in Asuncion, Paraguay. This is an event in which other organisations working on sexual diversity will bring to the table issues related to human rights and the lesbian, gay, bisexual and transgender community.

Even after a law is passed, there is a long way to go. A gender equality law that is not accompanied by a budget that allows the provision of services and guarantees the rights set out in the text is simply fruitless.

A question to ask oneself is: how effective are the discussions at these multi-lateral governmental spaces like the OAS? I believe they can be if they are accompanied with national action, such as a network of organizations in the country that are willing to uphold the commitments made by ministers and ambassadors at the international level. Unfortunately, we cannot yet say that the statements made in these spaces have, on their own, contributed to any reduction in the number of homophobic and transphobic hate crimes in Central America.

Lastly, it is important not to forget the existence and influence of conservative evangelical groups which, just as in Africa, are pressuring the governments of Brazil, Haiti and some other countries in Central America to return to a past of discrimination and hate. That’s why we mustn’t lower our guard!