The situation in Venezuela worsens day by day in almost all areas, but in particular, for people living with HIV. Unfortunately, the United Nations system has not found a way to be of greater use. 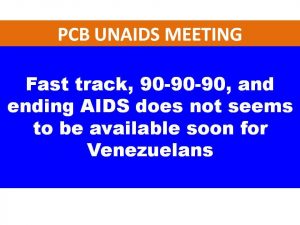 Nobody but the government of Venezuela has responsibility for what is happening with the sanitary, food, human rights and humanitarian crisis of this country. But this crisis did not begin this week or this year, it is an alarming deterioration process that has been happening for almost a lustrum. The question that many political analysts and journalists ask is what has and what should the «international community» do to help this battered country.

From this space we have published, in recent years, a number of articles and some editorials, directly or indirectly related to Venezuela – and we will continue to do so – about how the disproportionate crisis affects Venezuelans living with HIV, their families and all the other key and vulnerable populations.

We would like to share two aspects in this piece: 1. Update on the situation, in particular HIV-related issues; 2. Provide our reflection on the response of the United Nations System, regarding the UNAIDS Coordinating Board meeting, these days in Geneva.

The abandonment of people with HIV

For years, Venezuela has suffered severe drug shortages, including antiretroviral, which, even though officials deny it, have been documented and denounced by people with HIV. Two months ago there National Program round out of tenofovir and, at the end of August, only 50% of what is needed (85,000 bottles) will arrive in the country. There are 800 people with HIV who were treated with Complera® (combination of tenofovir, emtricitabine and rilpivirine), who did not receive it 4 months ago. There are also no baby formulas for children. It is well known that all antiretroviral stocks in the country are in red, there are no medicines and those about arrive into the country will be far less of what is needed.

But the crisis goes beyond HIV drug systemic stock outs. Health centres have long been abandoned by a significant percentage of health professionals who joined the diaspora outside the country. Hundreds of essential drugs are missing, the gondolas of public and private pharmacies are empty, there´re no testing kits or supplies. Just browse Google images using «health in Venezuela» to see people crowded in the corridors, sleeping on the floors, and using cardboard boxes to improvise incubators for premature babies, etc.

Unofficially, government staff for the first time has acknowledged that they do not know how they will continue to treat adults and children with HIV. There is no information on the impact of this long and painful crisis has on preventing HIV infection, we only know that there are no prevention interventions in place from the government or condoms, and buying them is a difficult task and a very expensive endeavor. And the government, impotent, keeps going with a storytelling, and refuses to receive help to mitigate the impact of the crisis. One thing is indisputable, many people are getting sick and dying, and some are exposing themselves to HIV. As there is no reliable data on any health issue produced by government programs, we will not know the size of the disaster for many years.

One would expect that in the face of a crisis of this magnitude, the entire United Nations system and other mechanisms, such as the Global Fund for AIDS, Tuberculosis and Malaria, would be seeking to work together to assist in dealing with the effects of this complex crisis.

On the response of the Global Fund, we have reflected on Key Correspondents their performance for more than a year (= 0). A sector of the Governing Board, led by civil society delegations and LAC, worked and confronted the Board, asking that the Fund would urgently support Venezuela. After months of work, a rare decision was reached, which has not yet had any concrete effect.

What has happened with United Nations System?

Little or nothing. During the week June 27th, the UNAIDS Coordinating Board (PCB) met in Geneva, which is expected to be a turning point for the future of this program. UNAIDS has been underfunded, its budget gap is more than 30%, and co-sponsors and the Member States that govern and finance it have called for a thorough review of how this agency mode of operation. In the months leading up to this meeting, a comprehensive evaluation was conducted with consultations with different stakeholders and a new model of operations was presented.

Those of us who have participated in some of these sessions have seen a consensus, at least in civil society, that: a) there is frustration with the performance of UNAIDS; b) They still believe that it should continue to exist a joint and vertical HIV program, but c) UNAIDS needs to make profound changes to improve its relevance to the response.

Thus, the agenda of the UNAIDS meeting has had four themes: 1) Its budget crisis; 2) Its evaluation and change on the operational model; 3) The annual discussion on performance and the new budget; and 4) A thematic discussion on combined prevention. But a space had not been secured to discuss and coordinate actions on countries in crisis such as Venezuela, Syria, Chechnya, Tanzania; and the list goes on. It is, at first glance, a very self-contemplative agenda, with little room for what goes on beyond Geneva.

In a direct dialogue with the Venezuelan communities, the delegation of NGOs and some representatives of Civil Society Organizations invited to speak during the PCB, we learned that it has been agreed to mention this issue and question the system response, in general about Venezuela.

The Venezuelan born, Executive Director of the International Consortium of AIDS Service Organizations (ICASO), Mary Ann Torres, spoke at the PCB and said: 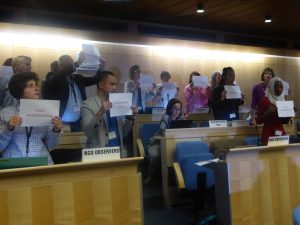 «We urge allies around this room to respond to this humanitarian crisis, looking beyond the limitations of policies, politics and income classifications. We ask you to look beyond the government’s reports and data and to invest – yes, invest resources- in strengthening community systems in particular to get the most accurate information about the crisis. We ask that you continue facilitating and start providing immediate concrete assistance.

We need resources to buy commodities, we need political support. We need you to be ready to act when the humanitarian emergency is declared. We need a longer-term strategy to build our health and community systems. We ask you to talk to Venezuelan doctors, activists, people living with HIV and to listen to what they need – and to act, now!”

As Mary Ann, finally, many colleagues from civil society have spoken on the PCB about Venezuela, that support gives much hope to the people in the country. But UNAIDS and agencies, in order to do things better, must engage in dialogue with communities on the ground. And evaluate the next steps, because this does not improve by putting a more staff members in Caracas, with hurried rhetoric and no well though gestures to show that something was done and will be done. Here we need urgent actions, as well as, medium and long term interventions. This is not business as usual, a lot of our people are dying.

The role of multilateralism

The serious crisis that overwhelms many countries, such as Venezuela, and the inability of multilateral agencies, such as the Global Fund, UNAIDS and its co-sponsors, is part of a much deeper problem that has been targeted by many UN funders governments questioning the future of the entire United Nations System.

It is clear that: 1.- countries have autonomy and sovereignty and 2. – These States governs the United Nations and its agencies. This creates an effect of immobility and highly condition what UN officials do and advise governments in some countries not to let their citizen’s die or been tortured. For that, we have diplomacy and the ability to exercise a subtle technical role contribute to reducing the impact of these disasters.

Indeed, many staff members in the system have a high capacity to avoid any conflict, generate any tension and challenge their continuity of the in country presence (and sometimes its own careers). But what is the purpose of staying if nothing can be done by your organization? At the same time, there are double speeches, the international, sometimes grandiloquent and progressive line, and long silences within the countries.

I’m assuming that all of the above is a generalization, as it is all, a bit unfair, because I know many colleagues (the majority coming from civil society), who today work in the System, that doing what is need to be done they almost every day put their work at risk.

There is a main responsibility for the deaths and the lack of control of the epidemic in this country, the Venezuelan Government, but there is also a very complex and increasingly less important sector of the multilateral system, which is losing almost our confidence and will bear a great responsibility for their inactions and omissions. Those who will pay the most expensive price, without a doubt, are people living with HIV in Venezuela.